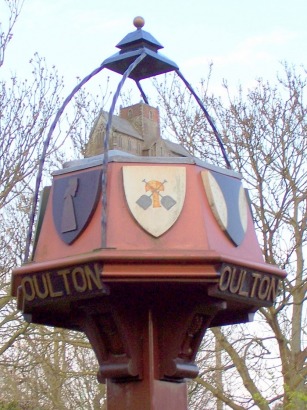 The Village Sign is situated close to the Somerleyton Road/Gorleston Road roundabout, on the corner of the community field. It was erected in 1990. The project to have a village sign designed and erected being organised by the Parish Council. The photograph (below) records the unveiling ceremony, performed by two children from Woods Loke Primary School (although not within the parish it is nonetheless the school that the children of the village attend during their primary school years).  The sign is a unique structure depicting the varied history of the parish and must be one of the finest village signs in England. A 'time capsule' containing various records, including the names and photographs of the parish councillors who put it all together, is buried alongside the sign. The top of the sign has a three dimensional model of St.Michael's Church. The octagonal base on which this stands shows eight panels that condenses symbolically Oulton's past. They are:- 1. A copy of the 'brass' effigy of John Fastolf Esq.,, (Lord of the Manor of Oulton (Houton) from 1419  until his death in 1445). - 2. The summer house of the author George Borrow (1808 - 1881) who resided in the south of the parish. - 3. The Arms of the Hobart family who were Lords of the Manor from the late 1500s until 1631. - 4. The 'Stook of Barley and Crossed Malt Shovels' which symbolises Oulton's agricultural past and its once flourishing malt houses. - 5. A copy of the 'brass' effigy of Katherine Fastolf, the wife of John Fastolf Esq.,. She died in 1478 and she and her husband are buried within St.Michael's Church. Katherine was a member of the Bedingfield family of Norfolk who later built Oxburgh Hall. - 6. Oulton High House, the old manor house of Oulton, built by the Hobart family in the mid to late 1500s. The front extension to the house was done during the Victorian era. - 7. A 'Sailing Wherry' which was a common sight on the waterways to the south of the parish in bygone years. - 8. The Arms of the Bacon family. 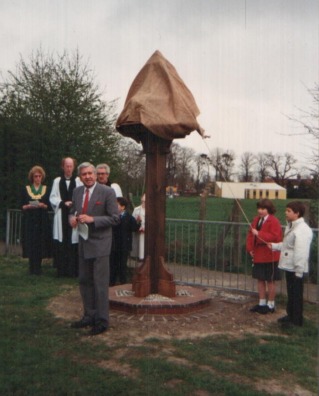 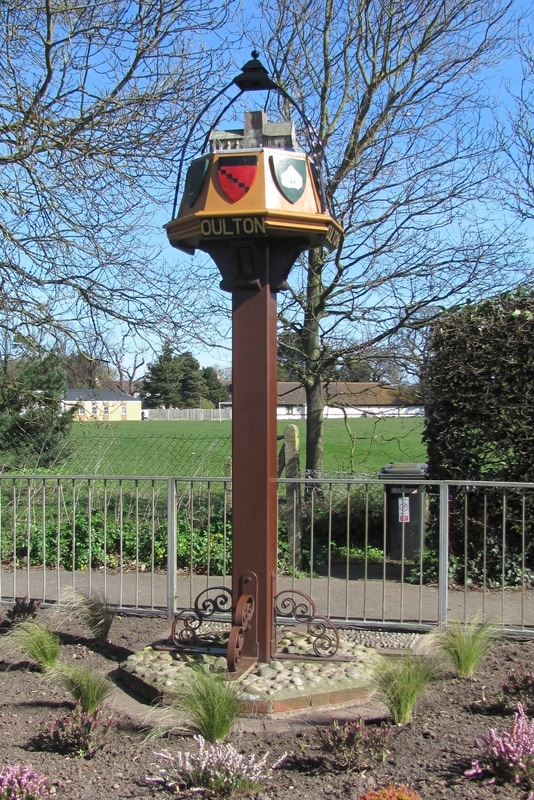 Above: Photo of the sign taken after extensive refurbishment. Reinstalled on Sat 25th March 2017. Unveiled by two of the now grown up children (Stuart Lawn and James Weston) who performed the ceremony in 1990 !. (All photos (c) W.Robertson)
​