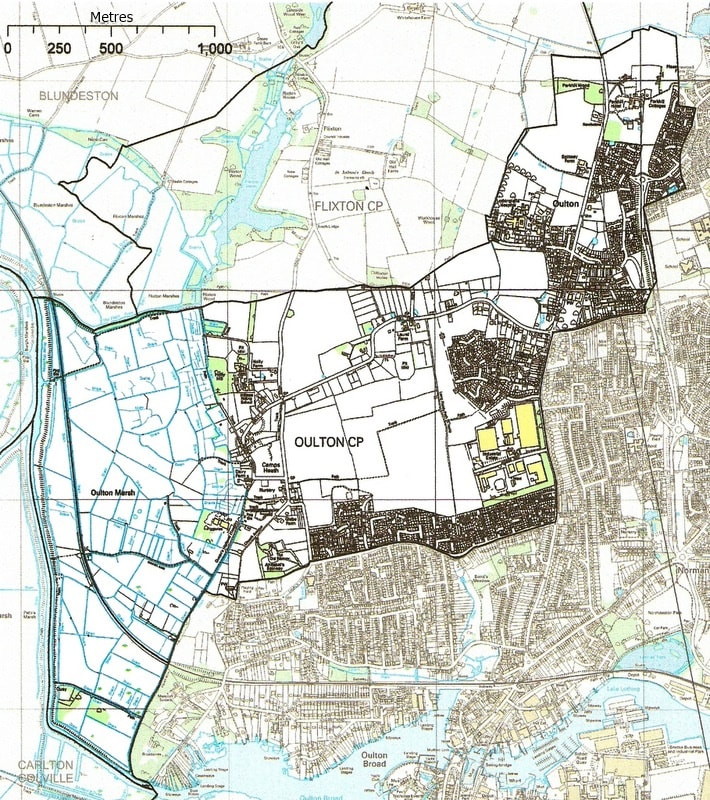 The boundary of the Parish of Oulton encompasses an area bounded by the west side of Gorleston Road (B1375) running from the Gorleston Road/Somerleyton Road/Hall Lane roundabout to the Sands Lane roundabout - the north sides of Sands Lane and just to the north of Church Lane to St.Michael's Church, then to the west of Queen's Highway/Fisher Row towards Oulton Dyke. It continues along the banks of Oulton Dyke as far as the Fleet. From there the boundary then runs eastward, just south of Flixton Decoy, crosses Wood Lane track towards Flixton Holes (on the B1074 Somerleyton Road). From the bend just eastward of the Flixton Holes it cuts north easterly behind Union Lane/Oulton Park Care Centre/Spinney and Newholme farms, as far as Parkhill Wood. It then crosses, in an easterly direction the B1375 just to the north of Parkhill Hotel. The boundary then runs south to include the new Park Meadows development on the west side of Millennium Way (as well as taking in a small part of the larger Parkhill development on the eastern side). From there the boundary takes in the northern part of Somerleyton Road back to our starting point at the Gorleston Road etc., roundabout. The parish church of St.Michael The Archangel is situated in the southernmost part of the parish. The ecclesiastical boundary differs somewhat from the local authority parish boundary as it also takes in a major part of north Oulton Broad which was until 1904 part of the Parish of Oulton.