Above: A drawing (by the author) of the Sir Adam Bacon brass within St.Michaels Church. It is the only known brass of a priest in full mass vestments of alb, stole, maniple and chasuble.
Sir Adam Bacon was Rector of St.Michael's 1301 to 1318.
(Copied from a drawing by J.S.Cotman, Norwich School of Artists).

Below: Part of the will of Katherine Fastolf.

Below: The remainder of Katherine's will (Acknowledgement to the Sampson Genealogy website). 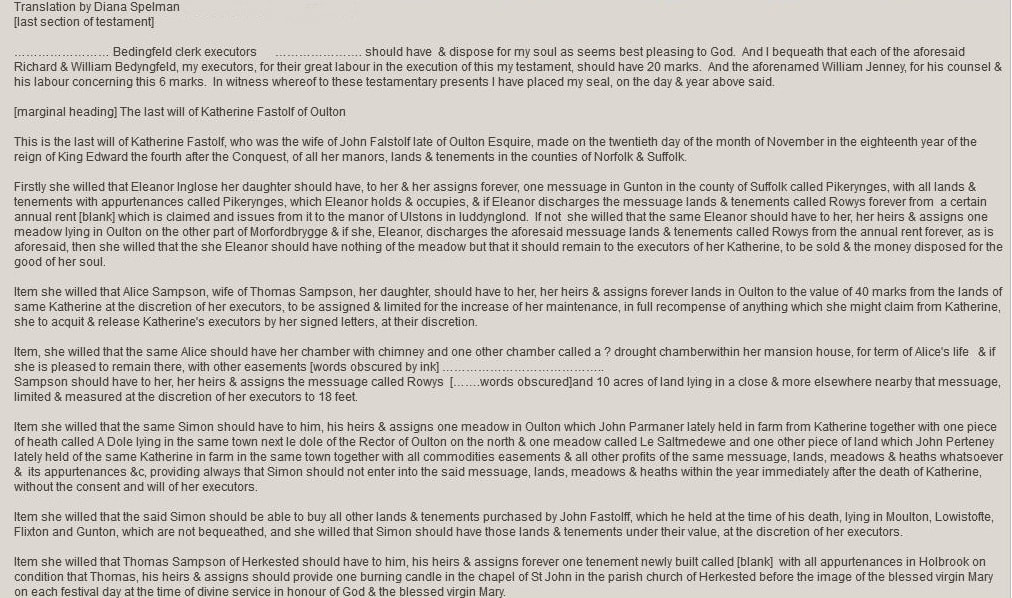 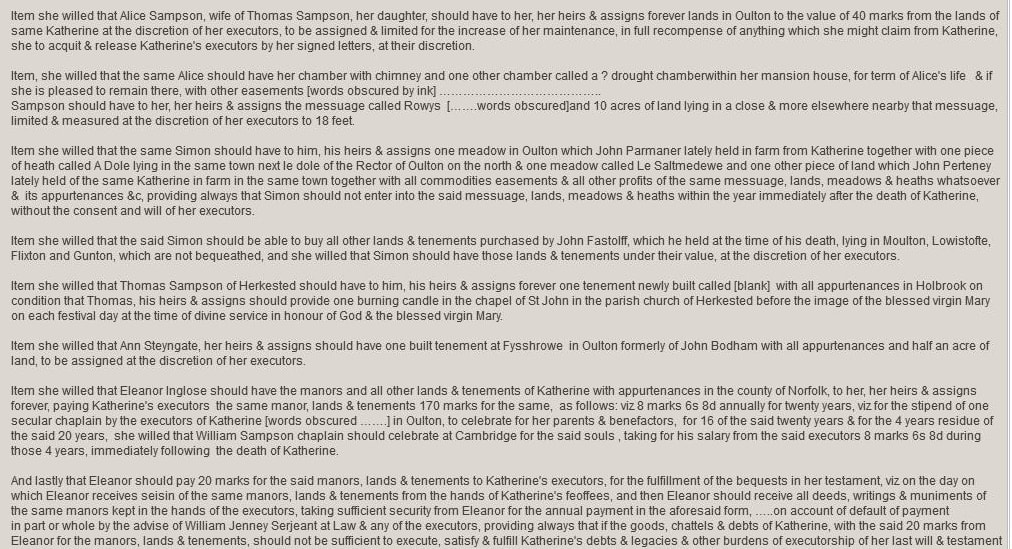 NOTES: Katherine and her first husband John Sampson had four children: John b c1425, Thomas (who predeceased his mother and is mentioned in her will,  ref: the stone to be placed on his grave). Thomas married an Alice who is mentioned in the will and described as a 'daughter' (actual daughter-in-law). Eleanor a daughter (who married twice 1. Robert Inglose 2. Sir William Jenny)  and Simon.

Katherine and John Fastolf had two daughters Joan and Margaret. 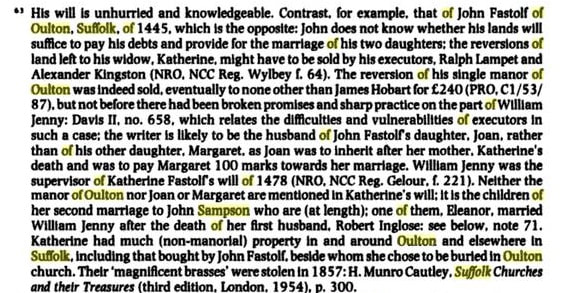 Above: Additional notes in respect of John and Katherine's Wills !! 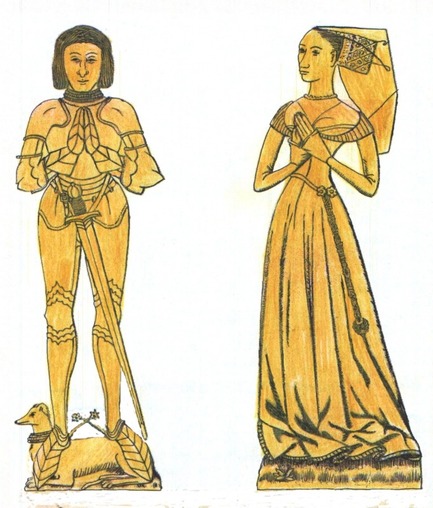 Above: The brass of John Fastolf Esq., and his wife Katherine (drawn by the author).

The following inscription, on a brass plate, is fitted below the brass effigies of John and Katherine:-

The above therefore translates as:-
'Here lies John Fastolf, Esquire, who died on 31st day of January, in the year of our Lord (A(nn)o) D(o)m(ini) 1445 and Katherine his wife who died on the 4th day of the month of January, Anno Domini 1478, on whose souls may God have mercy. Amen'
.
Below : What the original inscription looked like ! 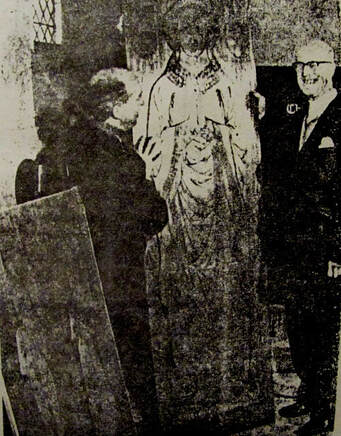 Above :  Alex Hampton (left) presenting the Bacon and Fastolf replica brasses to the Rev Edwin Barnes in 1978. Alex Hampton and his friend Allan Balls made the replicas using a mixture of brass filings and epoxy resin !! The brasses were mounted on boards to allow people attending the ceremony to do brass rubbings. The brasses are now inlaid into the floor close to the altar. 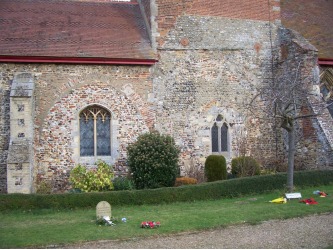 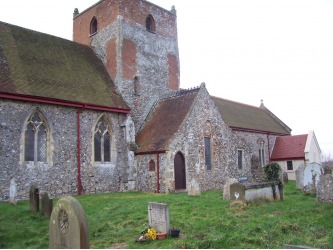 Above: Two views of St.Michael's Church. LEFT: The outline of arches on the south facing wall clearly shows where the South Transept and Aisle were once attached, the latter of which led into the pre-Reformation chapel of the Holy Trinity. RIGHT: The north side of the church showing what remains of the North Transept. This is now occupied by the organ chamber and choir vestry. The new attachment at the far end is the recently built (2008) toilet etc., facilities. 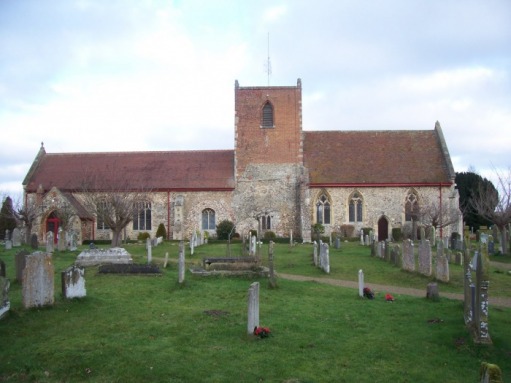 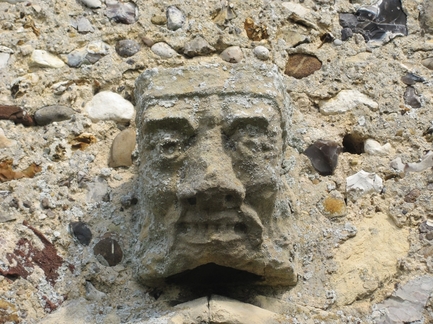 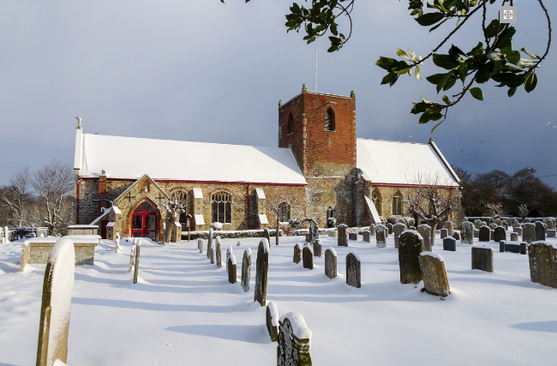 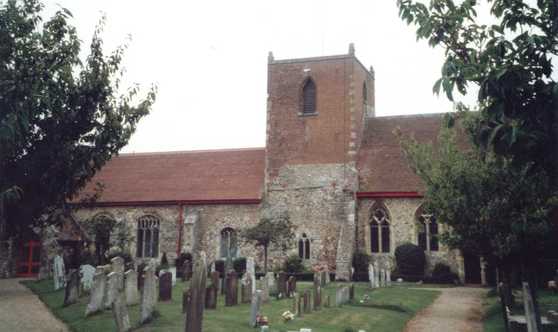 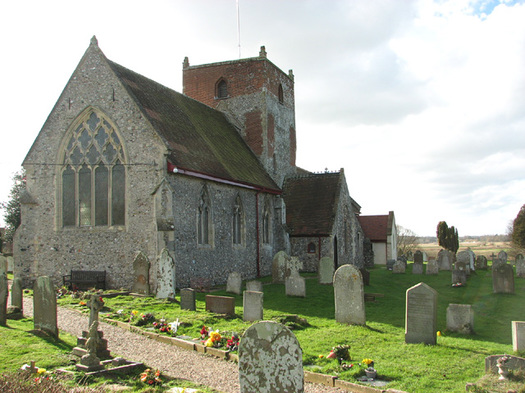 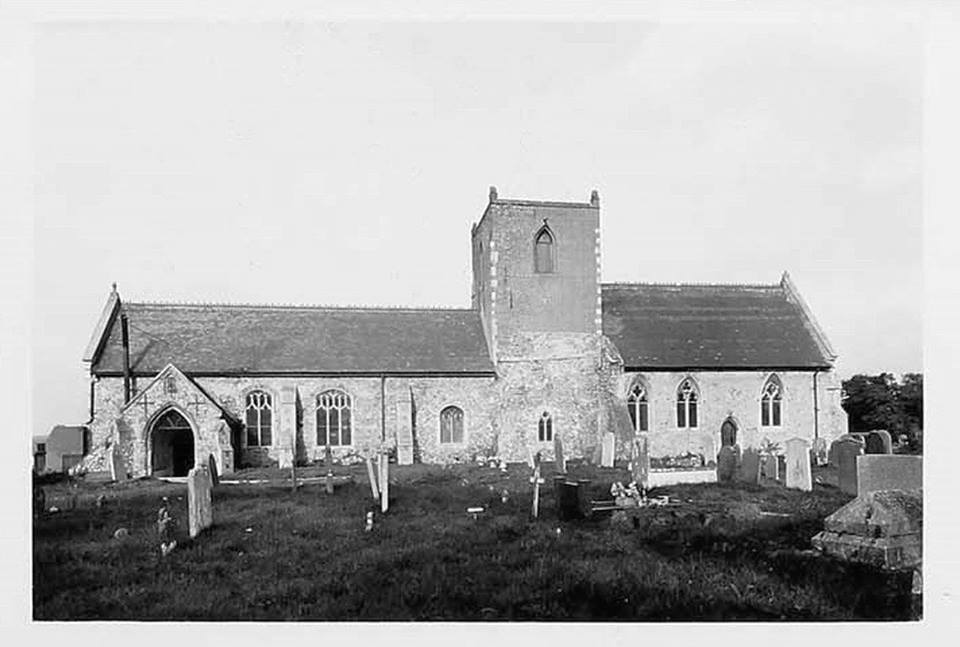 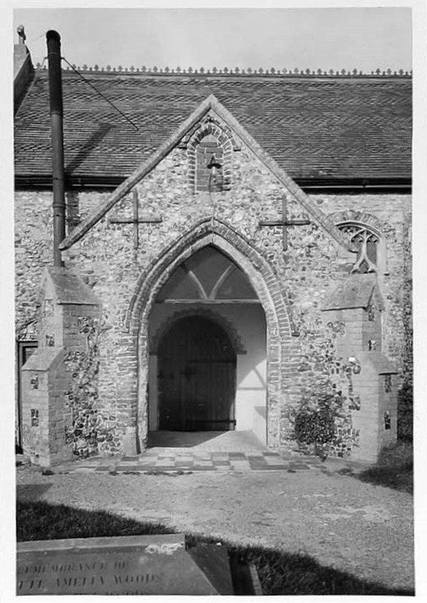 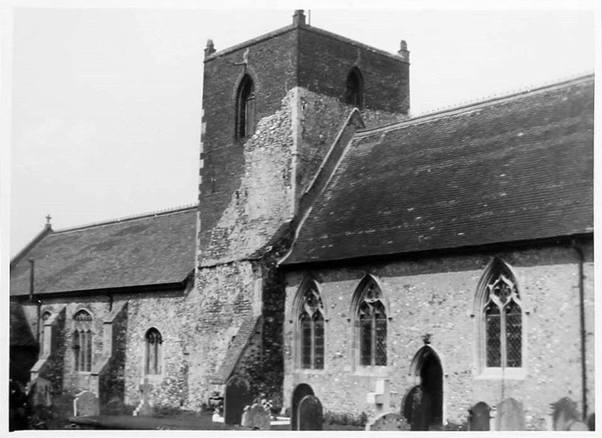 Above: Various views of St.Michael's Church etc.,. The rather weathered grotesque looking face carving is set in the wall of the church just above the priest's door - south wall eastern end. It must be at least a thousand years old (?) 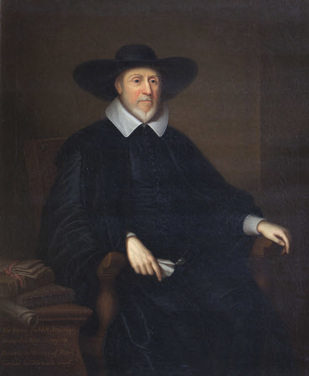 Above: Sir James Hobart 1436 - 1517, Attorney General and Privy Councillor  to King Henry VII,
Lord of the Manor of Oulton 1503 - 1507.  Many historians have stated that Sir James died in 1507, this is incorrect, there are papers that say he was relieved of his duties as Attorney General for fraudulent practices in that year. He lived for another ten years. Documents relating to his will are dated 1516 and he died in 1517. 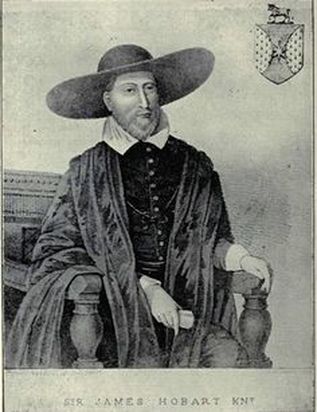 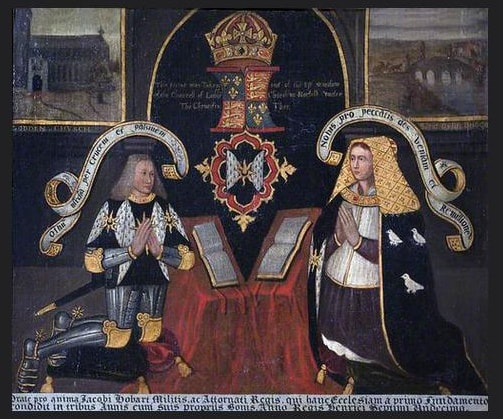 Above: Painting of James Hobart and his wife Margaret who resided at Hales Hall near Loddon.  The top left inset is of Loddon Church built at his expense. The top right inset is of St.Olaves Bridge, the building of which is attributed to Margaret to replace an ancient ferry crossing. . The banners read: Left -  'Lord Jesus pity by thy cross and passion.'   Right - 'Grant us pardon and forgiveness for our sins'
(Photo acknowledgement - National Trust, Blickling Hall)

The PDF document below is an extract from Copinger's Book of the Manors of Suffolk and relates to the Manor of Oulton in Lothingland. It more or less contains information already described in previous pages but makes a good read!!

Download File
The PDF document below is from a Suffolk Heritage website and ties in fairly well with what is recorded within these pages.