'Half Hundred of Lothingland: Dunston, held by Ala under commendation of Manni. 45 acres of arable land as a manor, half a bordar, then as now half a plough, woodland for 4 pigs, half an acre of meadow. Value then 10s, now 3s. Robert de Vallibus holds this from Roger Bigod.  Of the fief.'

​It is also recorded in the Domesday Survey that :- 'In Dunston, 1 freeman, Thored held 15 acres of arable land with a value of 30d'
​
Above: Extract from the Domesday Survey of 1086
A copy of the actual entry for the Saxon manor of Dunestuna (Dunston) with translation.
Note: Lothingland in those days being known as Ludingaland!

It is recorded that around a thousand years ago there existed a Saxon Manor - DUNESTUNA or DUNSTON - which is believed to have been located somewhere within the area occupied by the present day parish. The name Dunestuna is from the Anglo Saxon (Old English) words - 'dun' (a hill) and 'tun or ton' (a house/settlement/enclosure). The Rev. Alfred Suckling, Rural Dean and Vicar of Barsham, writes in his book 'The History and Antiquities of The Hundreds of Blything and Part of Lothingland, dated 1847, that 'among the lands of Roger Bigod, his tenant Robert De Vallibus is recorded as holding a manor in Lothingland called Duneston, which in Edward the Confessor's time had been the property of Ala'. In a following paragraph he concludes 'I am induced therefore to think that the Duneston of the Domesday Book, which is not elsewhere appropriated, must be identical with Oulton'. The manor at the time of the Domesday Survey consisted of 45 acres of arable land and half an acre of meadow, a woodland for four pigs, *half a plough and *half a bordar (peasant servant) , the manor had a value of three shillings. At the time of the Conquest, twenty years earlier, it was estimated to have been worth ten shillings!  (* one way of measuring the value of an estate/manor for taxation purposes was to estimate the number of ploughteams (eight oxen) needed to cultivate/plough the land. The same principle applied to the man power required ).  Roger Bigod was a Norman knight who fought with William the Conqueror at the Battle of Hastings (1066), he was Sheriff of Norfolk and Suffolk in 1086 and held the Half Hundred of Lothingland for the King.  The Bigods built the Suffolk castles of Framlingham and Bungay. The site of the Domesday recorded Dunestuna is believed to have been centred around the area of Holly Hill,  at the north end of Camps Heath, which is the highest point in the parish and a logical place on which to build 'a house/settlement/enclosure on a hill'.

Oulton can lay claim to royal connections with the Plantagenet Dynasty - Geoffrey Plantagenet, Count of Anjou, married Maud (Matilda) of England in 1128, daughter of Henry I and granddaughter of William the Conqueror. They had three sons, the first born became Henry II.  The third born - William, Count of Poitou (a.k.a. William FitzEmpress), born 21 July 1136, was given a large number of English estates among which Oulton, Suffolk is recorded. He died at Rouen, Normandy 30 January 1163 and is buried in Rouen Cathedral.

The actual village of Oulton has just gradually evolved over the last two hundred years or so. Prior to that there were very few buildings. What few villagers there were, if they could be termed as such, were mostly engaged in agriculture. The terraced houses on the eastern side of Oulton Street and in Oulton Road (North) were built in the mid to late 1800s and the early 1900s and must have increased the population of the village quite considerably. The population of the total 'parish' of Oulton in a census taken in 1821 totalled 704 persons. (The total population in that year for the Hundred of Lothingland was 10,607 of which Lowestoft had 3,675 (1,711 males and 1,964 females), Gorleston had 1,928 persons, Southtown had 1,039 persons and the remainder lived in the villages/parishes of the Hundred).

It has been noted that the first edition of the 'one-inch to the mile' Ordnance Survey maps of England and Wales printed in 1880 (the author has a copy of the map for the Lowestoft and Gt.Yarmouth area), the name of Oulton is placed where St.Michael's Church and Camps Heath are located. This may be an error but it has been said that Oulton was often referred to as Upper Oulton and Camps Heath as Lower Oulton! However this map was probably only showing the fact that St.Michael's was the parish church of Oulton. It also suggests that it was the area in general that was named Oulton and the name was not applied to 'the village' until it had grown into a much larger gathering of dwellings, following the erection of the 'High House' manor house, as stated above. 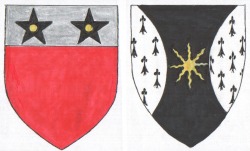 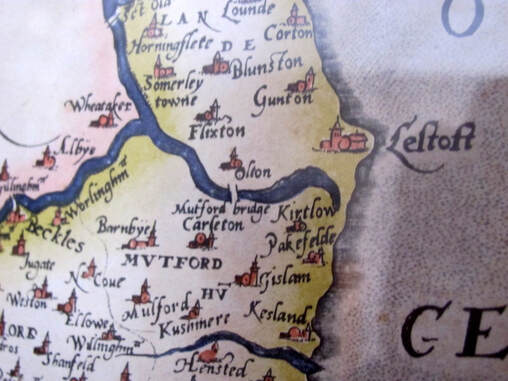 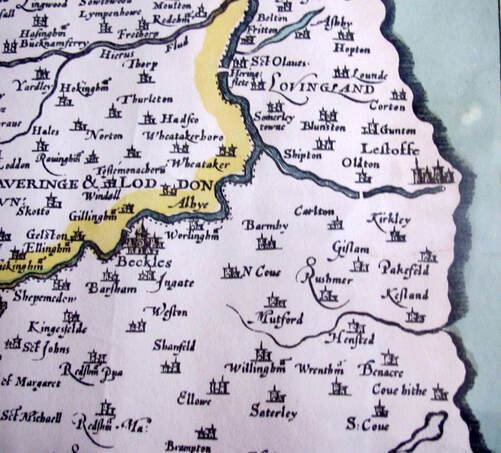 Above:  The two old maps (c 1575) referred to earlier.showing Oulton spelt 'Olton' on one and 'Oldton' on the other. ( It is interesting to note that one also indicates Flixton whilst the other names it Shipton !!!)