As we head northwards along Church Lane we first have to negotiate the double bend in the road, at Cypress Cottages. One of the cottages was the Camps Heath Post Office in the late 1800s/early 1900s. After the final bend we see ahead of us the incline that leads towards Hall Lane. A few hundred yards further on we arrive at a 'T' junction. Taking a left turn here will lead us into the small hamlet of Camps Heath. However at the junction we will pause for a while to learn of the factory that once stood behind the last dwelling on the right (Tudor Cottage). The factory, now demolished, was owned by the Suffolk Fat and Bone Co. (M.C.P By-Products Ltd.,) who processed animal carcasses. Apparently the by-products of which were fertilisers and the basic ingredients of glue. Quite a 'smelly' place at times, depending on the wind direction. Sometime after the factory closure in the early 1980s, the author had the presence of mind to photograph the buildings prior to demolition.

BELOW: Photos ( all © W.Robertson) of the Suffolk Fat and Bone factory. The road junction referred to above is just beyond the tree on the right of the left hand photo. The larger photo is viewed from Hall Lane, looking south. 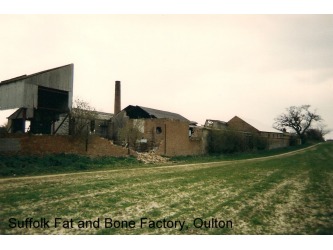 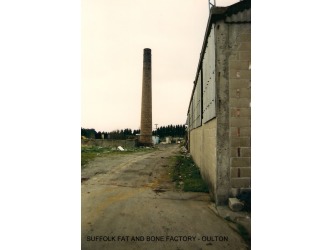 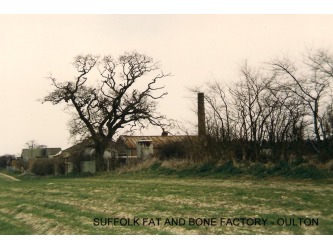 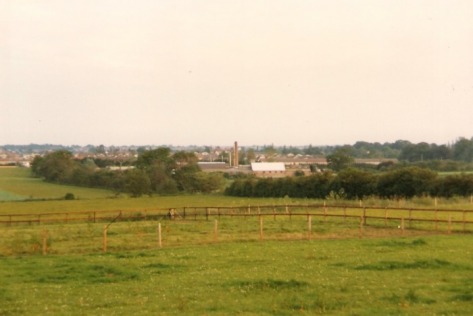 We will now take a left turn and proceed down the lane towards Camps Heath, at the end of which we meet another junction. Ahead of us is Dairy Farm. The farmhouse and its associated buildings probably date back several centuries. The main thoroughfare through the hamlet is Queens Highway. The track to the left at this point leads to the Fisher Row track that we have just visited. However we will turn right at this point in to Camps Heath. 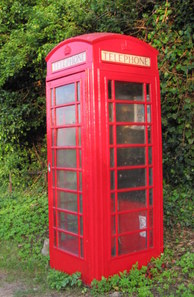 The kiosk stands opposite Dairy Farm (photo below). It is no longer operational having been declared redundant. It was purchased from British Telecom by the Parish Council for the princely sum of £1. It has been cleaned up and repainted by Mr Frank Weavers, a Camps Heath resident, who has agreed to keep it in good order. It will be used to display posters etc., for the Parish Council, Broads Authority etc., 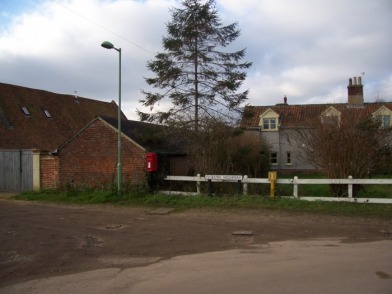 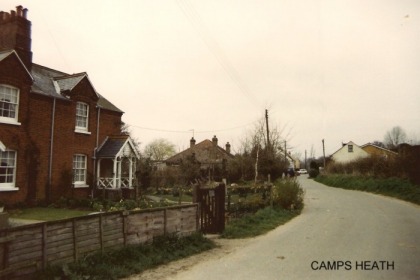 ABOVE: The main thoroughfare through Camps Heath (Photo © W.Robertson)

Camps Heath is a quiet little corner of the parish favoured by the horse riding fraternity. There are several stables and paddocks dotted about this area. It offers a safe and generally quiet area for those who enjoy sitting astride those magnificent animals. Vehicle owners who travel around this area should always do so with great care.  After we have passed through the hamlet we have to go up an incline (Holly Hill) which takes us to the top of the hill we saw earlier from Tudor Cottage. This is the junction of Wood Lane and Hall Lane. (As already stated this is thought to be the site of the Saxon manor of Dunestuna). We now proceed in an easterly direction along Hall Lane, which sits on high ground overlooking the Sands Lane development and distant Oulton Broad to the south. On our right, extending nearly the whole length of the straight road ahead of us, there was a large sand and gravel works. The excavations there were used as a landfill site in the 1980s/1990s. Afterwards the area was landscaped and is now used for horse paddocks/stables (see the larger photo above of the Suffolk Fat and Bone Factory viewed from Hall lane). Because of its use as a landfill site this will not be used as part of the area designated for the 800 or so dwellings of the Woods Meadow development. This area will be turned instead into a country park with access from Hall Lane. When we reach the end of the straight part of Hall Lane we meet a double bend in the road. On the right of the first bend there is a large gateway. This previously led to what was known as Chalkie White's Pit, a scrap metal business which closed in the 1980s. When it was in operation it was a useful place to pick up spare car parts! This area, because of contamination, will not be part of the Woods Meadow development either. On the left of the next bend there are several stables which occupy the site that was once a prisoner of war camp during WW2. Next to this was a WW2 gun battery emplacement. After negotiating these bends we arrive at the junction with the B1074. At this junction we will continue straight on. In doing so we pass on our right, Laurel Farm (photo below). This was previously owned by the Mobbs family, who gave their name to Mobbs Way (already described). Laurel Farm is still a working farm. The owners also run it as a  Bed and Breakfast business. The farmhouse gateway opens on to the Longfields Path (a public right of way) that leads south to Sands Lane. A little further along the road, past some cottages, the road takes a sweeping right turn. Opposite this, on the south side of the road, there once stood the now demolished Ivy Farm, photos of which (below) show it in its ruinous state in the late 1980s. By continuing past some rather expensive recently constructed houses we eventually reach our main starting point - the Gorleston Road/Hall Lane/Somerleyton Road/Oulton Street roundabout at High House Corner. We will continue our journey on Walk 5. 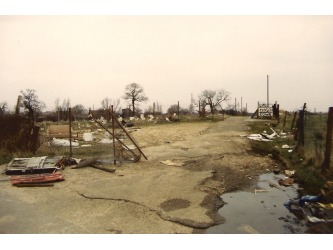 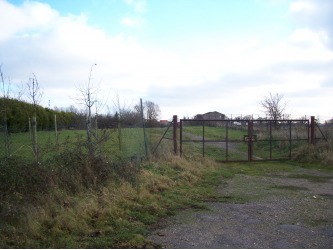 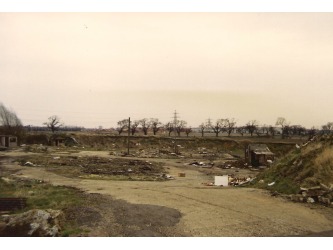 Above: LEFT and RIGHT - White's Pit in 1987 - not long after it closed.
CENTRE: A much tidier looking place - photo taken December 2008.
All photos © W.Robertson 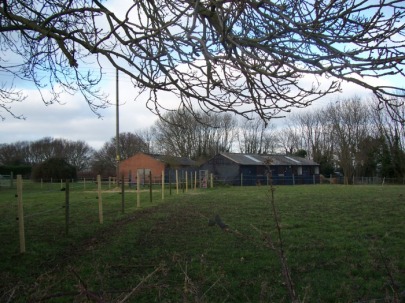 Above: The site of the WW2 POW camp and Gun Battery emplacement. (Photo © W.Robertson) 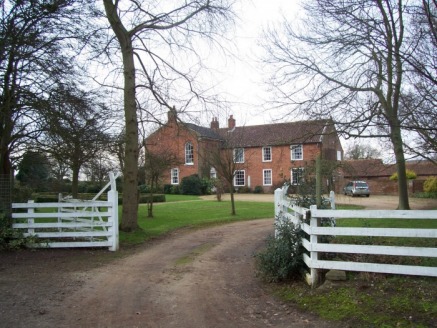 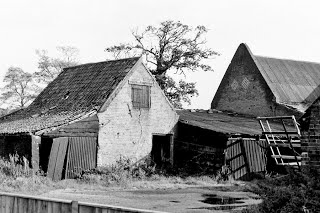 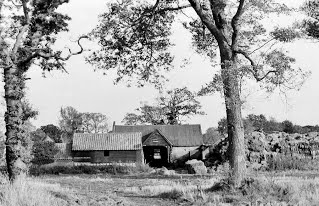 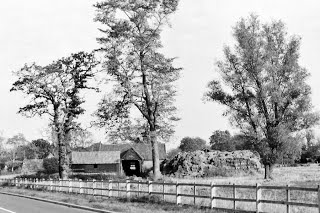 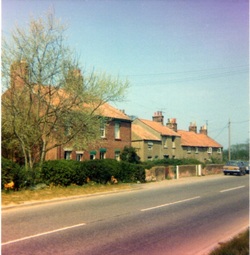 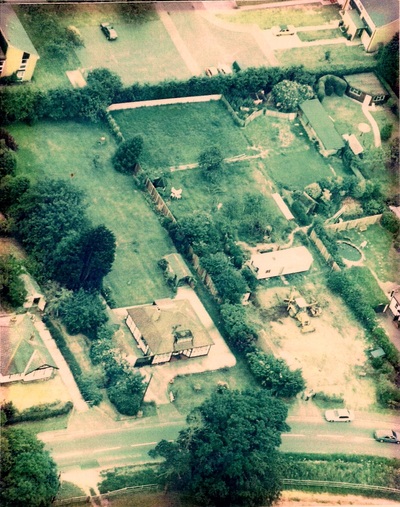 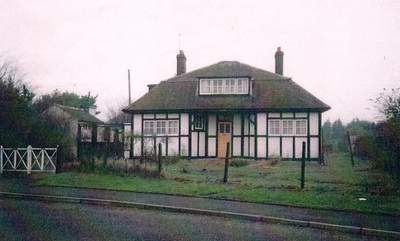 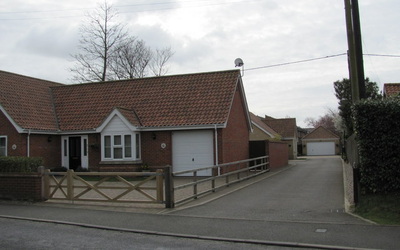 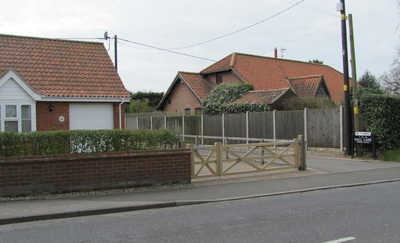 Above:  The top two photos show the bungalow 'Berea' that stood at No.7 Hall Lane. The aerial photo also shows where No.9 once stood and a new bungalow  then about to be be built on that site (the new No. 9 can be seen on the right of the bottom right photo).  No. 7 was demolished c 2007 and the three bungalows (bottom photos -
© W.Robertson), Nos 7, 7A and 7B with the shared driveway entrance, were built on the site.
​Thanks to Mrs Moore, 7A Hall Lane for the top two photos