This walk commences at the eastern end of Sands Lane. In the mid 1960s the author can remember when part of this lane was just a cart track, then only having a tarmac surface as far as Chestnut Avenue. At that time it was just farmland on the north side. The housing areas we see today having been built up over a thirty or so year period. Plans are now in place to develop the land to the north of this with up to 800 more dwellings (The Woods Meadow Development). 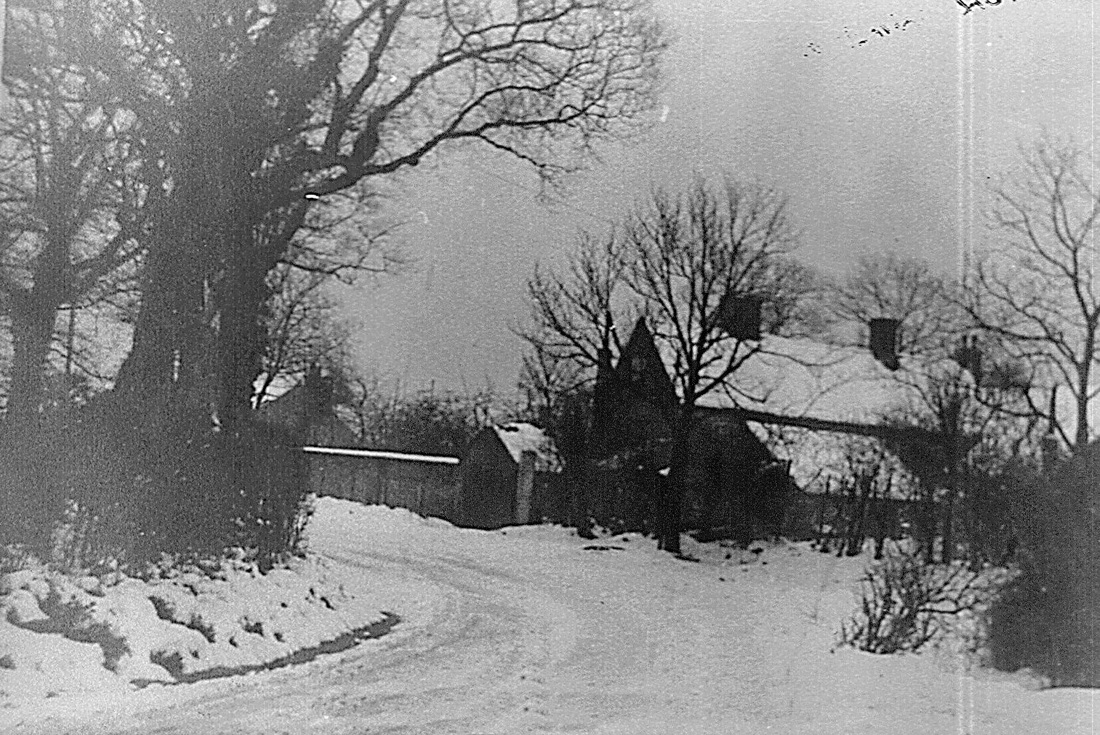 Above: An early photograph of Pond Farm, Sands Lane. Was situated on the bend in the road, left side, heading westwards, just before the entrance to Bonds Meadow and Chestnut Avenue. 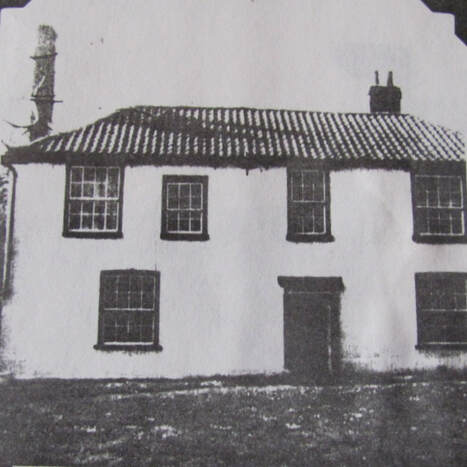 Above:  'Ashdale' house (still standing) which is situated close to the Sands Lane entrance to Bonds Meadow. (photo believed to have been taken in May 1981. Ref:  Photo by Simon Briggs ex BBHS pupil and is featured in an 1981 booklet produced by the school's history club entitled 'Oulton in the 1840s'. The building is listed. 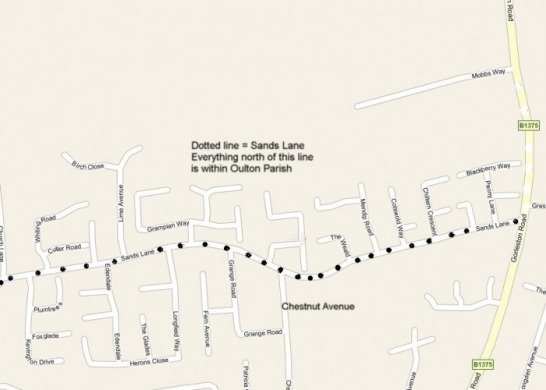 The above drawing shows the Sands Lane area of the parish and part of the land designated for the 800 houses planned for Woods Meadow (the open space at the top of the drawing). Sands Lane runs from Gorleston Road (eastern end) to Church Lane (western end). We turn left at the end of Sands Lane into Church Lane and a few hundred yards further on we take a right turn at the junction and continue until we reach St.Michael's Church. 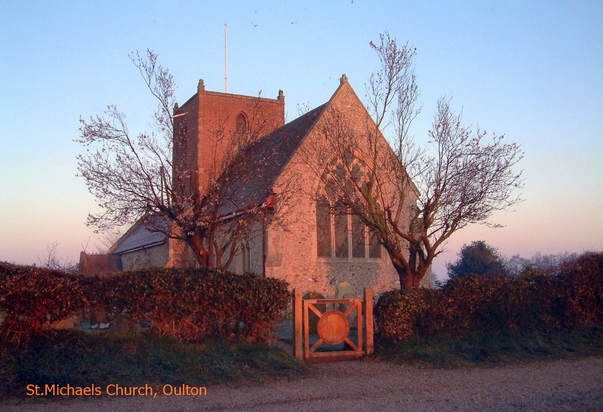 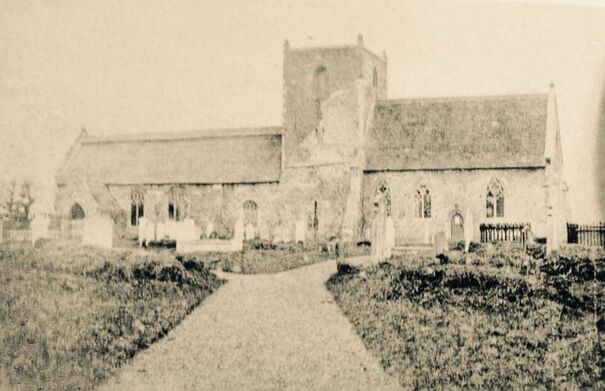 Above:  An old photo showing the then thatched roof 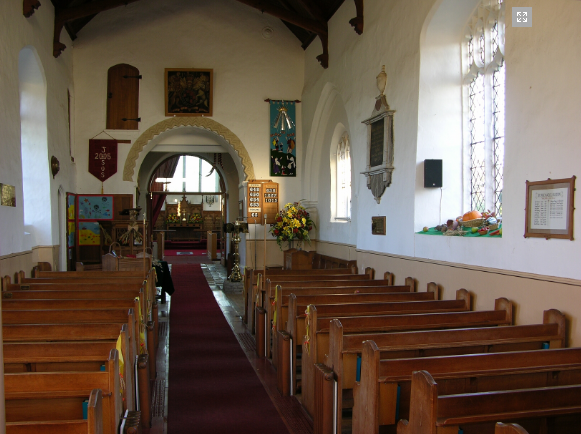 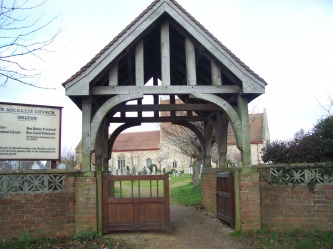 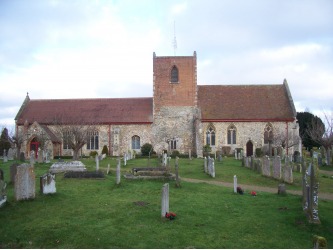 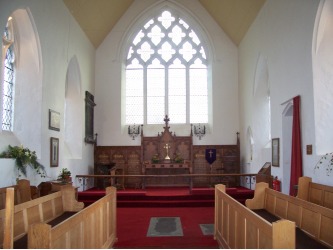 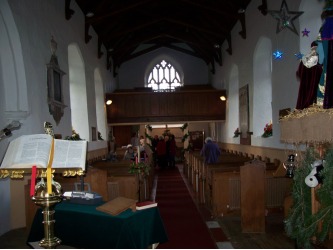 Above: (© W.Robertson)  LEFT - The church lych gate. CENTRE LEFT: St.Michael's Church. CENTRE RIGHT: The Altar (eastern end). RIGHT: Viewed from just beyond the choir stalls (roughly under the tower) looking westwards.  St.Michael's is a charming little church, well maintained and clean. In the centre right photo the two brasses can be seen. 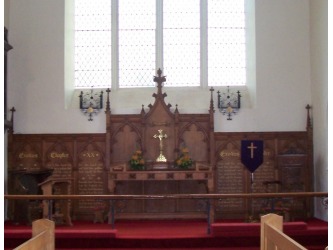 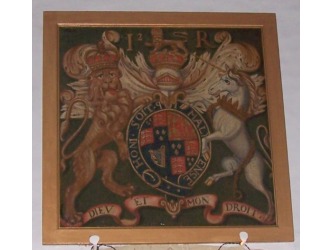 Above: (© W.Robertson). LEFT.  Close up of the St.Michael's altar-piece. *This was originally installed in St.Margaret's Church in Lowestoft. It was purchased and fitted in St.Michael's when the chancel of St.Margaret's was repaired and a new alter-piece installed. RIGHT. The Royal Arms of James II which hangs in St.Michael's. *It originally hung in St.George's Church, Hanover Square, London. (* information from Rev.Alfred Suckling's book of 1847.) 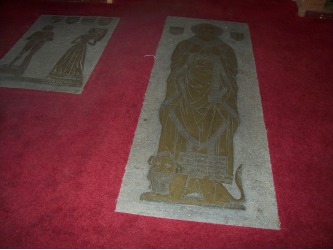 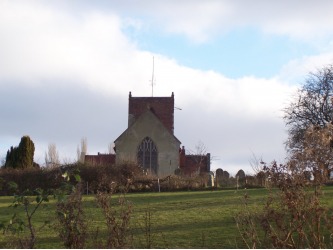 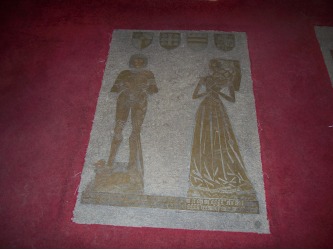 The St.Michael's Brasses. (Photos © W.Robertson). LEFT: shows the comparative sizes of the brasses. The left brass depicts the effigies of John Fastolf Esq., and his wife Katherine. The other brass being that of Sir Adam Bacon (Joint Lord of the Manor of Oulton and Rector of St.Michael's in 1301). RIGHT: an enlargement of the Fastolf brass. CENTRE: St.Michael's (western end) viewed from Queens Highway.

We continue down the track to the left of the Church gate which leads us to Queens Highway. This is a track that runs from the railway crossing (which we will reach by taking a left turn at this junction) to the little hamlet of Camps Heath on the right. Some of the marshlands in this area are leased to the Suffolk Wildlife Trust by the Oulton Poors Trust. We will take the left track from this point until we reach the railway crossing.  The railway is the line that runs from Lowestoft Central Station to Norwich. Great care must be taken when crossing the line. We will continue our walk on the following page (Walk 3). 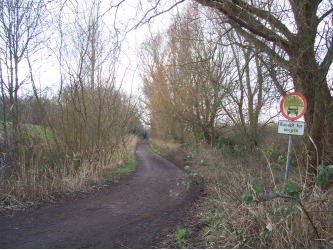 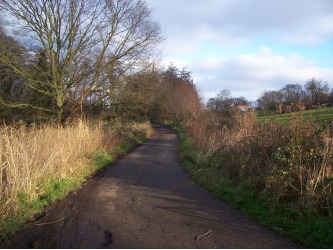