Having arrived back at our main starting point, we will once again go through the village of Oulton by turning left into Oulton Street and proceed northwards. (Once clear of the village, take care when walking on this busy road. There are no footpaths!). We have already visited 'Oulton' Hall, concealed on the right just past the village. Continuing along the B1375 we pass Spinney Farm on our left and a bit further on we find Newholme Farm, again on the left. Parkhill Hotel is situated on the right just opposite Newholme Farm. If we stay on the road and descend the hill from this point we will reach the north boundary line of the parish at the bottom of the hill. Parkhill Hotel sits back from the roadway surrounded by a well looked after area of lawns, trees and other buildings. It is a popular venue for civil marriages, for which it is licensed, as well as for wedding receptions etc.,

We will have to retrace our steps back once more to the village, as there is no public right of way to visit the remainder of this part of the parish. Heading southwards back along the B1375 we take a left turn at the crossroads just as we enter the village. This will take us along part of Oulton Road North. When we arrive at the right hand bend a little further on you will see, on your left,  some new properties that have recently been built. This is part of the new Park Meadows Development. We go off to the left at this point (see photo below) and enter the new estate on to Fallowfields Road, at the end of which we take a right turn which will lead us down to the large roundabout at the northern end of Millennium Way. By viewing the surroundings it can be clearly seen where the proposed last section of the Northern Spine road will be built. This, when completed (hopefully in the not too distant future), will join the road to the A47 near Corton Long Lane. We now walk southwards from this point down Millennium Way (its full length, which runs from this roundabout to the roundabout at the junction of Peto Way and Oulton Road, consists of the roadway, a cycle track and footpath. Take care and stay on the footpath otherwise a cyclist may get you!!).

When we arrive at the traffic light controlled crossroads  (opposite the new Aldi supermarket) we turn right into Somerleyton Road. There is a photo below which shows what this point looked like before Millennium Way was built. The main thoroughfare from Lowestoft then being Oulton Road. Continuing along Somerleyton Road we again arrive back at our main starting point at the High House Corner roundabout.

This concludes our tour of the parish which hopefully has been enjoyable. If you live in the parish, or in the vicinity, then the author hopes that this has given you an insight into the history etc., of the parish. If you are just a visitor to this website then perhaps one day you may wish to come and visit us. 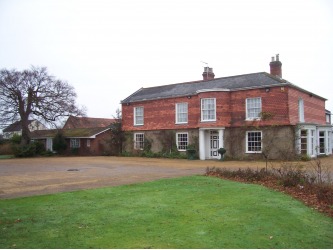 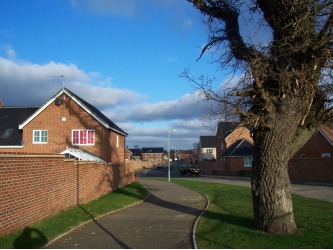 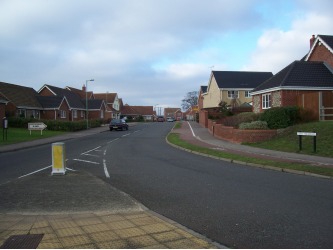 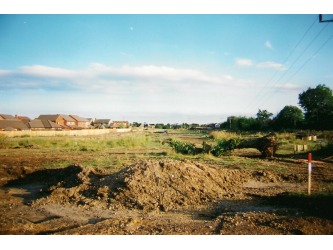 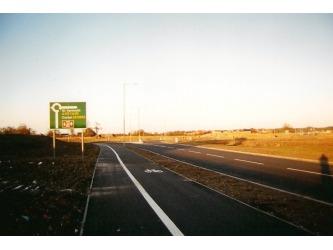 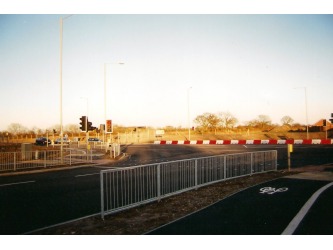 Above: Millennium Way under construction. LEFT: View looking south from the end of Somerleyton Road. This is where the traffic light controlled junction is located. CENTRE: View just before the Parkhill roundabout looking north. Compare this with the penultimate photo below.  RIGHT: View of the traffic light controlled junction from Somerleyton Road. Just beyond the red/white blocks is where the new Aldi supermarket now stands.
​© W.Robertson 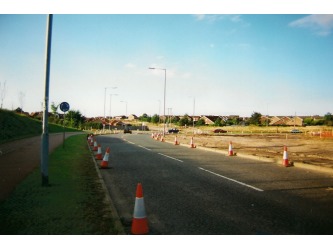 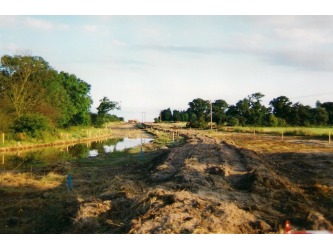 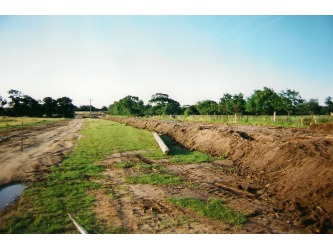 Above: Millennium Way under construction. LEFT: Looking north. From Peto Way towards the roundabout at the southern end of Millennium Way/Oulton Road. CENTRE and RIGHT : Views looking north from the end of Somerleyton Road area. © W.Robertson 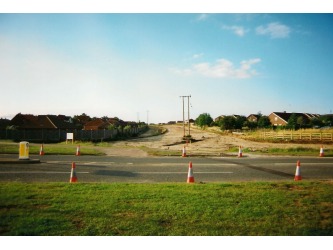 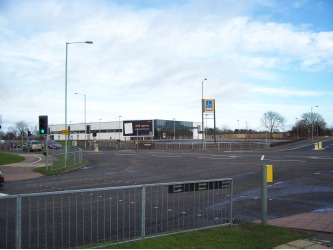 Above: LEFT: View of Millennium Way under construction. Viewed from where the north end of Peto Way and Oulton Road meet. The centre of the photo is where the roundabout now exists. RIGHT: The new ALDI supermarket (taken December 2008) which opened for business on 29th January 2009. © W.Robertson 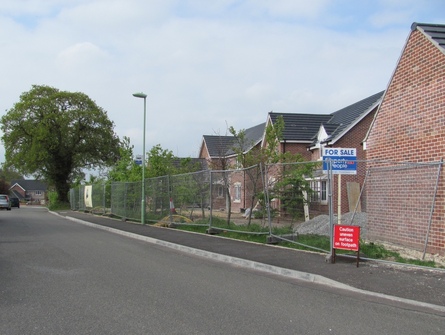 Above: The Parkwood development alongside Oulton Road North (May 2013). This is opposite the Methodist Chapel looking northwards. © W.Robertson 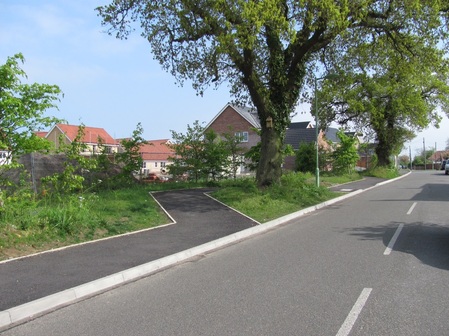 Above: The Parkwood development alongside Oulton Road North (May 2013). This is opposite Danesbury House looking southwards. The trees have preservation orders on them, hence the irregular shaped pavement.
​© W.Robertson 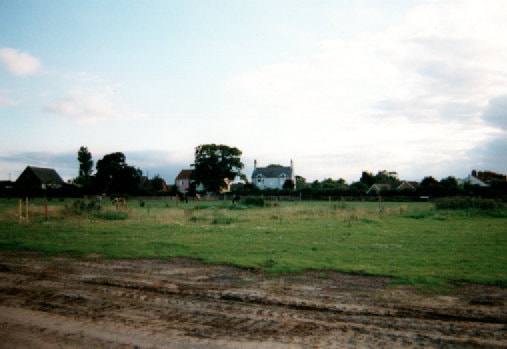 Above:  This is a distant view of Oulton Road North showing the Methodist Chapel on the extreme left and Danes bury House in the centre, Devonshire Farm farmhouse on the extreme right. The photo was taken when Millennium Way was about to be laid. All of the foreground is now the Parkwood development, © W.Robertson 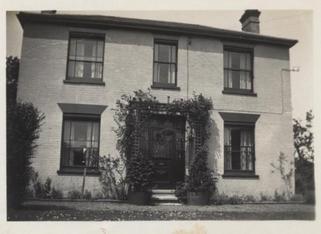 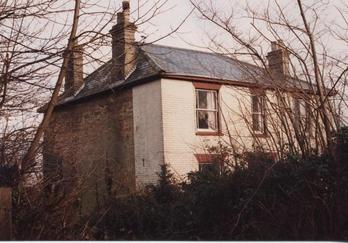 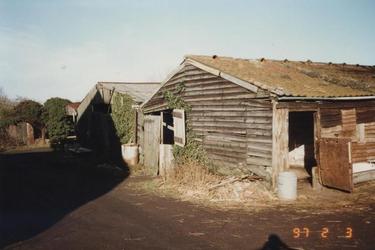 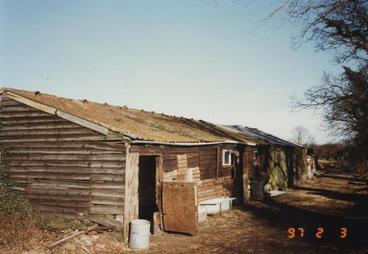 Above: The four photos are of the farmhouse of 'Devonshire Farm' and it's outbuildings that once stood near the bend in Oulton Road North close to the entrance to the development in Tubby Walk. New houses now stand on the site.
The farm was run by a Mr Povah who purchased it in 1918 from a Mrs Robinson, she apparently came from Devon and this was no doubt how the name of the farm originated.
Photos and information kindly supplied by David Jefferson 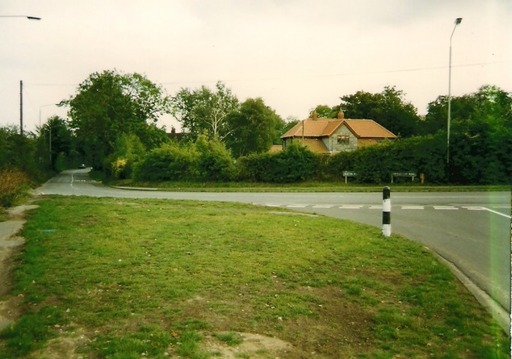 Above: Oulton Road and the eastern end of Somerleyton Road before Millennium Way was constructed,  Photo - © W.Robertson 1980 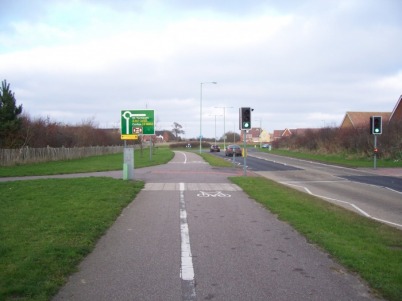 Above: A view of the approach to the Parkhill roundabout on Millennium Way, looking northwards. A new section of road (the final section of the Northern Spine Road) was built from this roundabout to join the A47 near Corton Long Lane. This was a welcome relief for the residents of the Parkhill development!!
Photo taken December 2008 -  © W.Robertson. 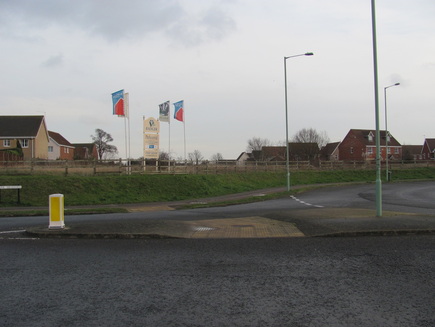 Above:  A gap which waited for a long while to be filled!!  The final phase of the Northern Spine Road was built from here through to meet the A47 at Corton Long Lane.   (photo taken February 2014  © W.Robertson) 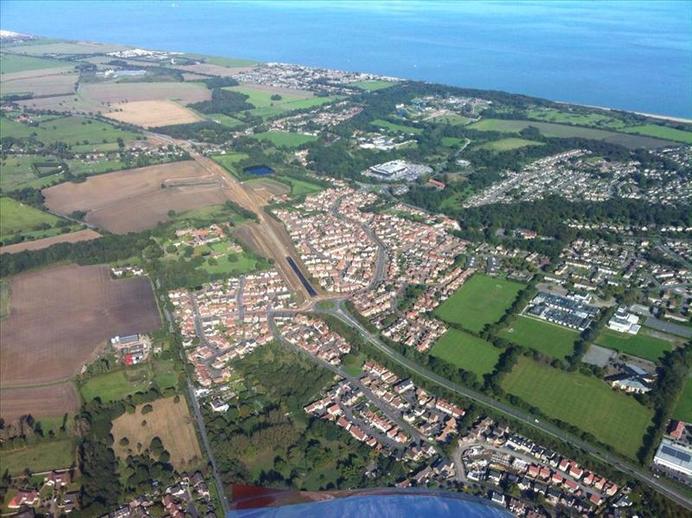 Above: An aerial view of the progress of the Northern Spine Road construction (5 Oct 2014).
Reproduced here with the kind permission of Andy Fletcher.

Above: A series of views taken from the layby, on the A47, looking towards Blundeston Road and the proposed north end of spine road.
​© W.Robertson 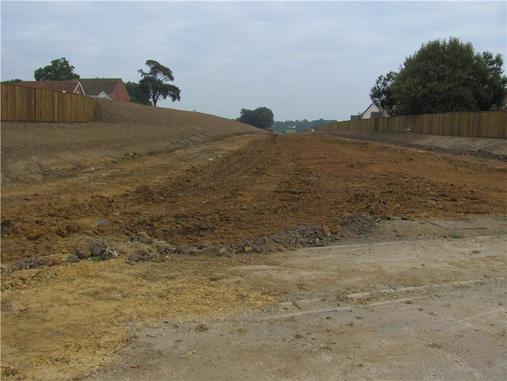 Above: The Bentley Drive end of the Northern Spine Road being prepared, (2014)  © W.Robertson 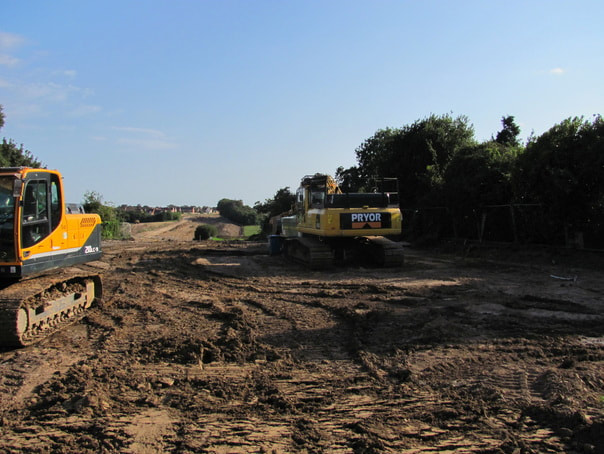 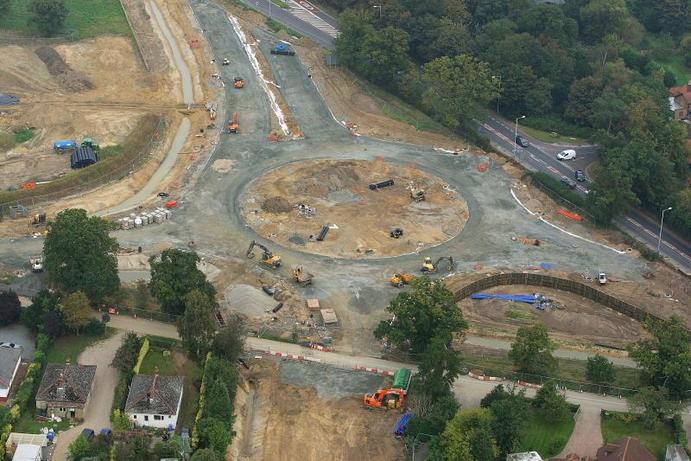 Above: Construction of the roundabout to serve the Northern Spine Road.    Corton Long Lane junction on the right where the white vehicle sits.    Blundeston Road runs diagonally across the foreground.  (2014)  Photo by Mike Page 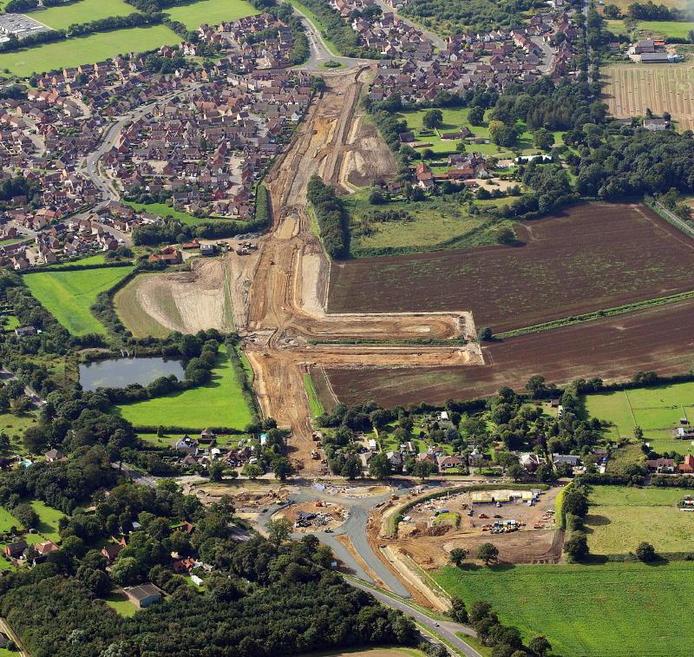 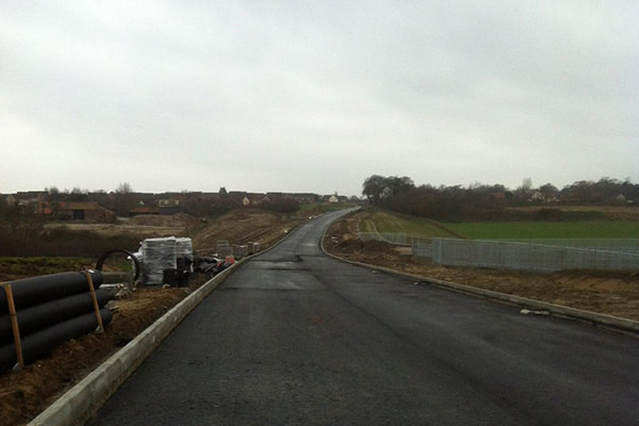 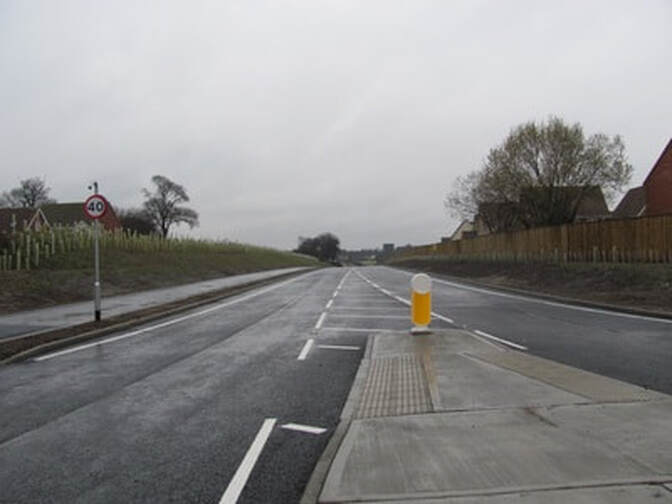 Above: The Northern Spine Road on the official opening day. taken from the Bentley Drive roundabout looking north.
​© W.Robertson 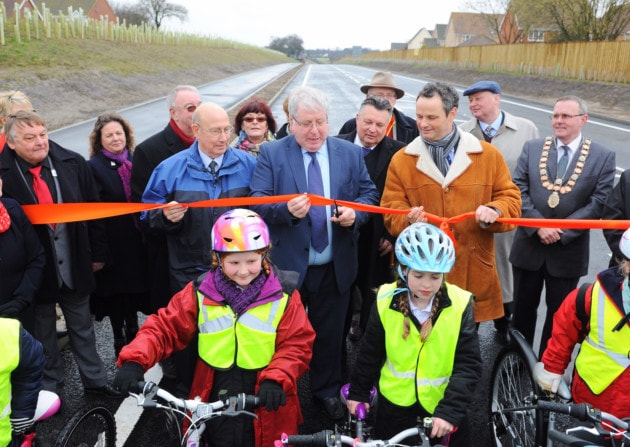 Above: The official opening of the Northern Spine Road on 15 March 2015, by the Minister for Transport Patrick McCloughlin.  Local children on their bikes being the first people to use the new road.  (Photo: Archant). 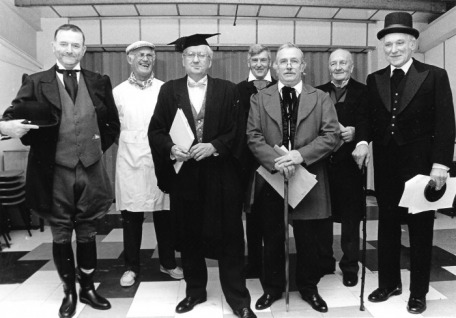 AND FINALLY!  Above: A photo of members of Oulton Parish Council taken at their re-enactment of the inaugural parish council meeting and centenary celebration in December 1994. Back row L to R: Peter Fletcher, Charles Swan and Jim Goodhew. Front row L to R: Patrick Finnigan, Brian Hunter, William 'Robbie'  Robertson (the author)  and Ken Alexander. Taken in the small hall of the Community Centre. Behind the concertina type screen at the rear of the photograph is the Community Church altar.

Please also visit the Oulton Parish website that has been constructed to Honour the Brave and Resolute men of Oulton and Oulton Broad who sacrificed their lives in the Cause of Freedom in World War 1, World War 2 and the Falklands War (1982).
http://oultonparishbookofremembrance.weebly.com

The Official Oulton Parish Council website can be found at:-
www.oultonpcsuffolk.info/

​The Official Website for the Oulton Community Centre can be found at:-   hallbookingonline.com/oulton/