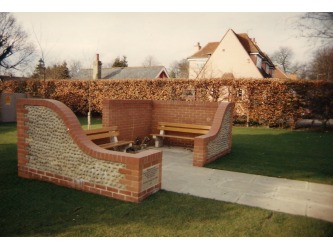 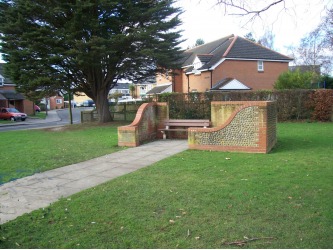 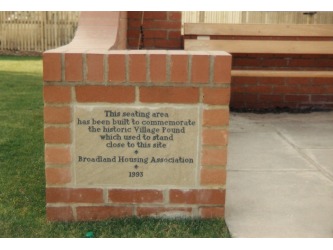 (Above photos © W.Robertson)
​Having completed our trip around the village we will now start our tour around the parish, commencing at the Somerleyton Road/Gorleston Road roundabout. We will proceed in a southerly direction down Gorleston Road. The first place of interest we would have met until recently was a small rectangular brickbuilt structure at the entrance to Bloomsbury Close. When developers built on the site it was part of the agreement that they would erect some fitting replacement for the rectangular walled Village Pound that once stood near the road entrance. The resultant commemorative walled seating area is shown above in the left hand picture. The right hand picture shows the commemorative plaque which read :- 'This seating area was built to commemorate the historic Village Pound which used to stand close to this site - Broadland Housing Association 1993'. The site consists of Housing Association properties and Bloomsbury Court. The latter providing warden controlled sheltered accommodation for the elderly and a communal meeting room. When the centre picture was taken in December 2008 it was noted that the inscription needed a good clean up! Because of vandalism and it being used as a gathering point for undesirables, it has now been demolished and a paved commemorative area placed at the same point, with a commemorative plaque at the centre (carved by the author). Photo (C) W.Robertson 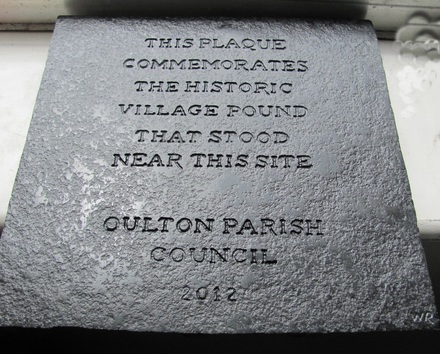 This latest feature was decided upon by the Parish Council and planned to be completed in 2012. However due to delays the work was not completed until 2013 !  (A bit too late to alter the already carved centrepiece! - which has 2012 carved on it.).  A dedication service was held on completion of the work, led by the Pastoral MInister of the Oulton Community Church (Capt., Paul McDonough, Church Army and Oulton Parish Councillor) in July 2013.

Below: Photograph of some members of the Parish Council and friends at the ceremony.  (C) W.Robertson 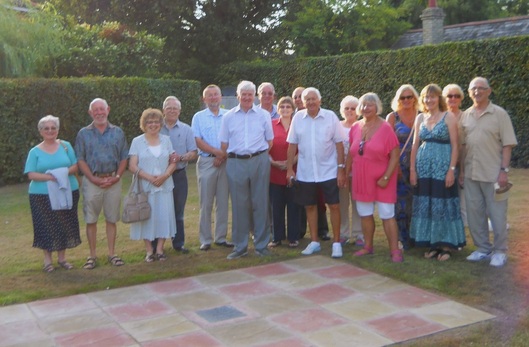 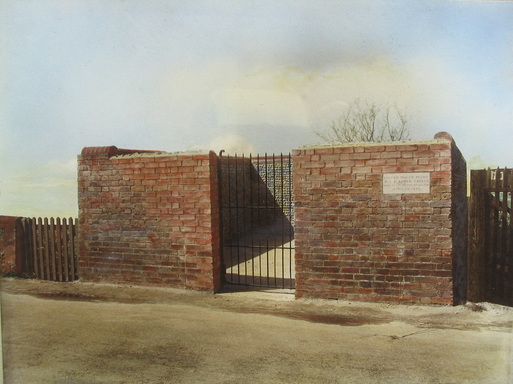 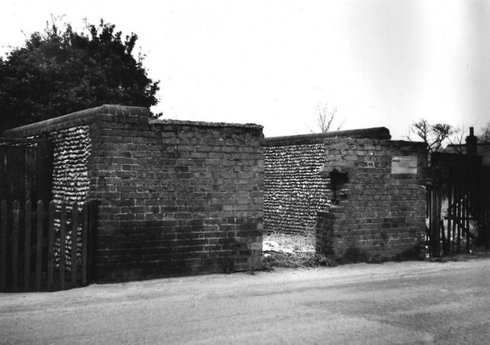 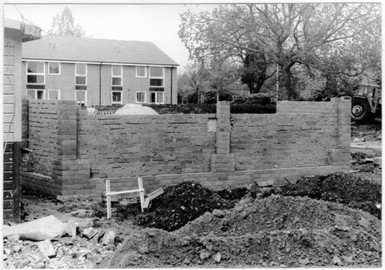 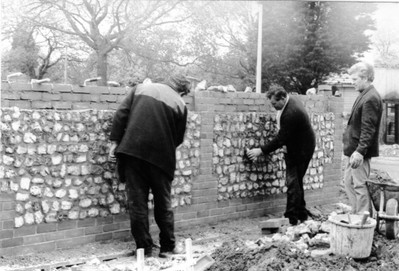 Above: The above two photographs show the 1977 Pound being constructed. Photos: Ivan A.W.Bunn 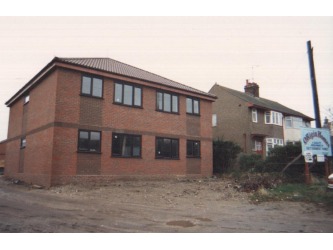 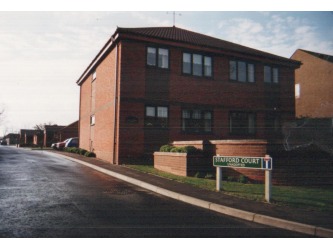 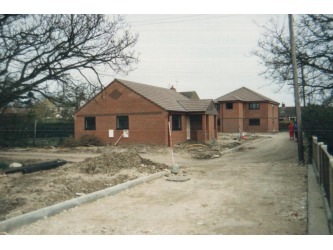 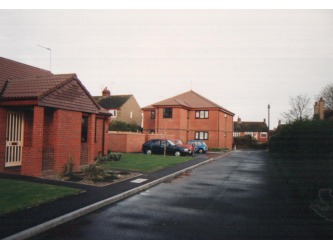 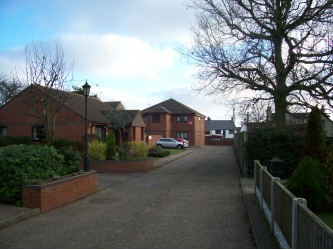 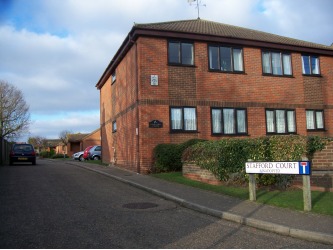 As we proceed a little further down Gorleston Road the next road on the right is Stafford Court. This is a small complex of retirement bungalows. Priority for occupancy was given to local people. The above photos show three photos of the site under construction and three photos when completed. The complex takes its name from Stafford Cox who was the headmaster, for 37 years in the early 1900s, of what was the Yarmouth Road School (later known as Gorleston Road School). The bottom two views were taken December 2008.
(All photos © W.Robertson). 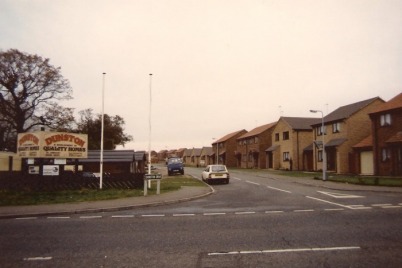 Just a short distance down Gorleston Road we come to the entrance to Dunston Drive (above) which leads into the Dunston housing development. 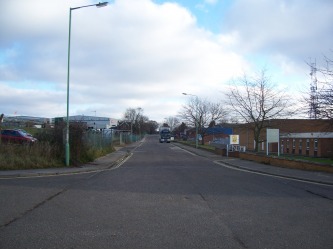 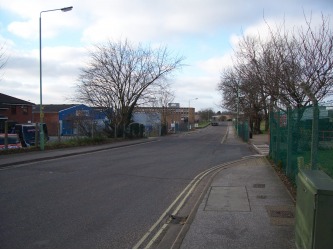 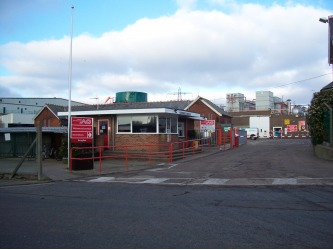 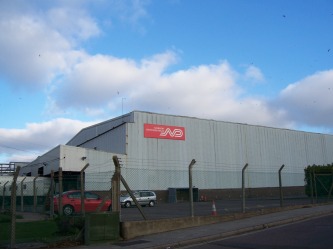 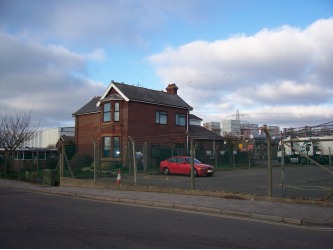 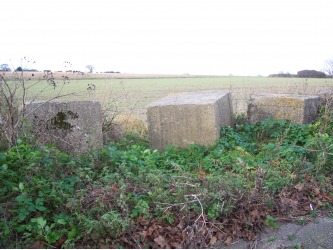 As we proceed past the Dunston Drive entrance we then have on our right, screened behind some trees, what must be the largest 'fridge freezer' in the area. A large 'cold store' and vegetable processing/freezing plant, originally owned by the Christian Salvesen company but now operated by Norbert Dentressangle. Products from the Birds Eye Walls/Unilever factory in Lowestoft are stored there and also products from further afield, including some from the continent. The cold store is part of the Oulton Industrial Estate site, the entrance to which is in Mobbs Way (named after a once local farmer who farmed Laurel Farm).

The above six photos (© W.Robertson) show the site - TOP -  LEFT: Mobbs Way looking towards Gorleston Road. CENTRE LEFT: Mobbs Way looking westward. CENTRE RIGHT: Entrance to Cold Store. RIGHT: The main cold store building. BOTTOM - LEFT. The oldest building on the estate. It is now the main offices for the cold store but was once part of the old Isolation Hospital for the Lowestoft area. Used in the late 1800s and early 1900s to isolate people who had highly contagious illnesses until their recovery.  The hospital at that time being quite isolated itself! During World War 2 it was used by the Home Guard. There was then a rifle range behind the house.  BOTTOM - RIGHT: At the western end of Mobbs Way we find several relics of the second World War  i.e. some large concrete tank blocks. They now serve the purpose of still preventing any vehicle entering the field beyond!. Beyond the tank blocks you can just make out Longfields Path, which leads from the B1074 next to Laurel Farm through to Sands Lane. UPDATE: Longfields Path is now the boundary between an extended Industrial Estate and the new housing development of Woods Meadow. We end our first walk a bit further down the hill at the Sands Lane/Gresham Avenue/Gorleston Road double roundabout. 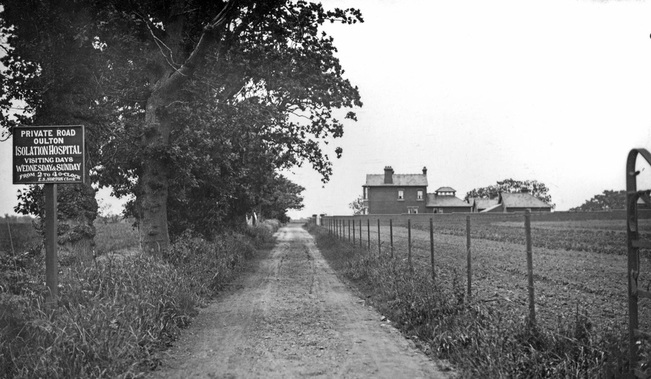 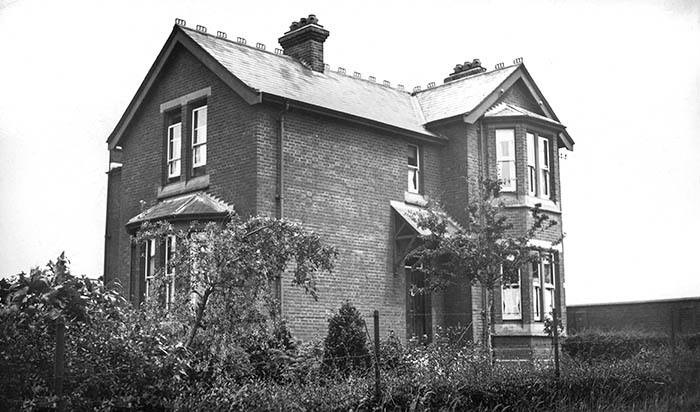